The Cup Stays in Tallahassee!

The Cup Stays in Tallahassee 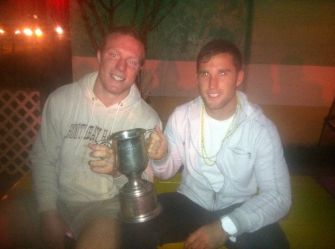 Leading up to this past weekend, the Seminoles had big expectations to fulfill. The 'Noles were coming off a loss down in south Florida at FIU's Ruggerfest where they were beaten 19-29 by the Panthers, thus putting Florida State's record at 2-1-1 in divisional competition. However, the sour taste of defeat would be short-lived as each garnet and gold jersey bearer would drink from the infamous Gordo's Cup Friday night.

The Gordo's Cup is an annual rivalry tradition between the University of Florida and Florida State University. The victor of this heated contention retains possession of the Gordo's Cup until the following spring when the teams meet again. Seminoles have capitalized on the two previous opportunities and were hungry off a loss, looking for a three-peat. However, scalping the Gators would be no easy task for the 'Noles as they are a proven formidable opponent year in and year out and are currently second ranked among the SEC.

The rivalry began with UF's flyhalf slotting the posts for 3 points with an early penalty. For much of the first quarter, 'Noles were backed up on their own goal line, shielding the gators from advancing into the try zone. In the 20', Colby Carinhas made a spectacular defensive stop by holding the ball up in the try zone to prevent the Gators from scoring. 'Noles countered by moving down the field with a succession of penalties which lead to a score from scrumhalf Dan Buzak as he kept the ball off a 5 meter scrum and dove over the try line. Just before the half, constant pressure down inside the 'Noles redzone put the Gators up by 3 as they rebuttled with their own score off of a 5 meter scrum.

Again, UF scored first in the second half off a penalty 35 meters out advancing the scoreline to 7-13. However, 'Noles would soon regain ground as Man of the Match, Dan Sammons dragged half of the Gator defense from 22 meters out into the try zone, good for 5 points (12-17). At the 70' mark, Colby Carinhas would pull out his spin move off a slot to slip by 2 defenders and put the 'Noles up 19-13 as the try was converted. Gators came back strong, but fell short as the flyhalf managed to score in the corner with less than 2' to go, but could not convert his kick. Seminoles played fantastic defense and held the ball for the remainder of the match until the ball was kicked to touch. The whistle blew 3 times sending the 'Noles jumping and embracing in celebration as the scoreboard would show 19-18, making them three-peat Gordo's Cup Champions.

The Men's Rugby Team at Florida State would like to thank all of the fans who came out to support the team in their victory over UF and all of those following the updates at home as you all contributed greatly to such a thrilling match. The support is much appreciated. We would also like to thank our sponsor Gordo's, Tallahassee for allowing us to have such a great event take place. Please continue to support your club by following us on Twitter as @FSURugby and liking us on Facebook!

We would also like to congratulate the Emerging XV on such a deciding victory over a mixed UF and Tallahassee Men's team. The 'Noles shut out their opponents in a 40-0 defeat and showed lots of talent and potential for the future of the club.